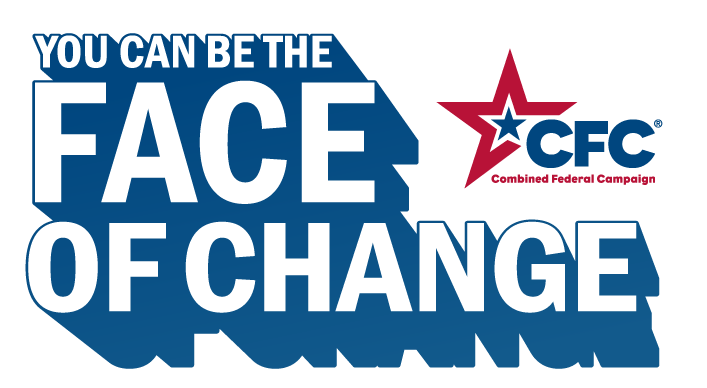 Welcome to the Combined Federal Campaign. 60 Years of Giving. Overseen by the Office of Personnel Management (OPM), the Combined Federal Campaign is the official workplace giving campaign for federal employees and retirees. This year, the CFC celebrates its 60th anniversary. Since its inception, the CFC has raised more than $8.5 billion for charities and people in need. As we recover from the challenges of the past year and meet the new challenges of 2021 and beyond, CFC pledges make a real and meaningful difference to a countless number of individuals throughout our communities, our nation, and the world. Some people might say it takes an extraordinary person to care enough to give, but it's more common than you think, and it's easy! Anyone can be a changemaker through the CFC. Read/watch messages of support from leaders across the federal government.

Giving online is our favorite pledge method! It has all the giving options, is easy to renew each year, meets all federal security standards, and reduces paper waste. Or download and try the new, improved 2021 CFC Giving App from your app store. Search for charities via the online charity search.

Leaders from various Departments and Agencies have been sharing messages of support for the 2021 CFC.
Read their memos and watch their videos here.

Application season for the 2022 CFC begins December 1! Read the OPM memo announcing the new application and fee schedule. Access the application training resources to find out more about how to apply to be in the 2022 CFC.

Learn more about how the CFC Charity Administration Center is a charity's best friend and what information you can access through your dashboard by watching this short video.

ARE YOU A CFC CHARITY?
Access Resources using our Charity Toolkit

Thank You Messages from CFC Charities

Thank you very, very much for your generous contribution to Pregnancy Aid Centers, Inc. through the Combined Federal Campaign. We truly appreciate your support.To learn more about the good work your gift will do please visit our website. And please, if you would, encourage your colleagues to give through the CFC as well. The CFC is the best-managed workplace charity fund drive in the country and very important to thousand of other charities as well as to us. We are most grateful for our Federal, Military, and Postal Service CFC givers.Sincerely,Mary JelacicCFC Coordinator

Thank you for your generous donation. Your gift will help us in providing compassionate care and comfort to our patients and their families as they face the challenges that come with a life-limiting illness. Calvert Hospice has been providing quality end-of-life care for thirty-five years. We have a challenging mission with limited resources, but because of thoughtful gifts like yours, we are able help our patients and their families make the most of every moment at a time when connecting is most important. Thanks once again for your contribution and enabling us to do the important work that we do.

On behalf of the staff, board members, and patients served, Planned Parenthood of Washington, DC (PPMW) is grateful for your gift of support. Your gift will have a direct impact on teens, women and men in communities across the Washington, DC metropolitan region. For over 80 years, our experienced and supportive medical staff gives each patient medically accurate and high-quality preventative care, and the education team empowers others to disseminate information so individuals can make informed decisions and get the care they need, no matter the cost. PPMW has served the people of Washington DC, Maryland and Virginia, and thanks to you, our mission continues.

Lost Dog & Cat Rescue Foundation (LDCRF) can?t thank you enough for supporting our organization through the 2020 Combined Federal Campaign (CFC) and standing with us in our mission to rescue animals in need.Generosity from supporters like you provides much-needed resources for our team of over 300+ active volunteers?making it possible for us to effectively organize the intake, treatment, and placement of the thousands of animals we rescue yearly.2020 has been an especially busy year for our organization, your contribution couldn?t be more timely. We?re grateful for the incredible support shown by our community and will make the most out of your donation!All the best,LDCRF Teamwww.lostdogrescue.org

Thank you so much for your generous contribution to Humane Society of Baltimore County, Inc. through the Combined Federal Campaign. We truly appreciate your support.To learn more about the good work your gift will do, please visit our website at www.bmorehumane.org. And please, if you would, encourage your colleagues to give through the CFC as well. The CFC is the best-managed workplace charity fund drive in the country and very important to us and the thousands of other charities listed. We are most grateful for our Federal, Military, and Postal Service CFC givers.Sincerely,Wendy GoldbandDevelopment Director & CFC Coordinator

Thank you for your gift! You're helping build a vibrant community where all people realize their full potential. #ChangeTheStory

UNITED WAY OF THE BATTLE CREEK AND KALAMAZOO REGION
93594
Body

Dear Caring Donor,On behalf of the entire MedStreet Family and most of all, the clients we serve, I am writing to thank you for the confidence you have shown in MedStreet by making a donation through the CFC. Your support will help MedStreet to meet its mission to Heal, to Teach, to Bridge, and to Love wherever we are needed. We are so grateful for your contribution, and we are happy to welcome you to the MedStreet Family.Because of generous individuals like you, we are able to increase the number of visits we make to the homeless community, and your support also allows us to purchase much-needed medicines and medical supplies to care for our homeless clients.Rest assured that your support will be applied to MedStreet?s most urgent needs. As a nonprofit organization, we know how important gift stewardship is, and we will be ever prudent with your resources.Thank you again,William J. Mazzella, M.D.Founder & President

Your generous donation to Dogs & Cats Stranded on the Streets through the Combined Federal Campaign (CFC) is helping save dogs and cats that have been beaten, neglected and injured. These helpless victims just want to find safe, loving homes and your gift is helping to make that possible. We are honored that you have chosen to support our organization. To learn more about our work and how your CFC donation will help, please visit our website. We consider every dollar contributed vital to ending animal abandonment, abuse and neglect and are truly grateful. Thank you again on behalf of all the unwanted dogs and cats!Sincerely,Jennifer DurneyPresidentDogs & Cats Stranded on the Streets

Thank you very much for your generous donation to Neuter Now in the Combined Federal Campaign. This past year, we were able to rescue 48 cats in just three months, provide spay/neuter surgeries, feed and care for them daily, and relocate them. We were able to nurse 4 abused and abandoned cats back to health with the help of our local veterinarian. We look forward to being able to expand our reach and save the lives of many more cats and kittens in the months and years to come. Thank you again for your partnership and support ? we couldn?t do it without you.