“Look for the helpers” – I found them at the NF Network 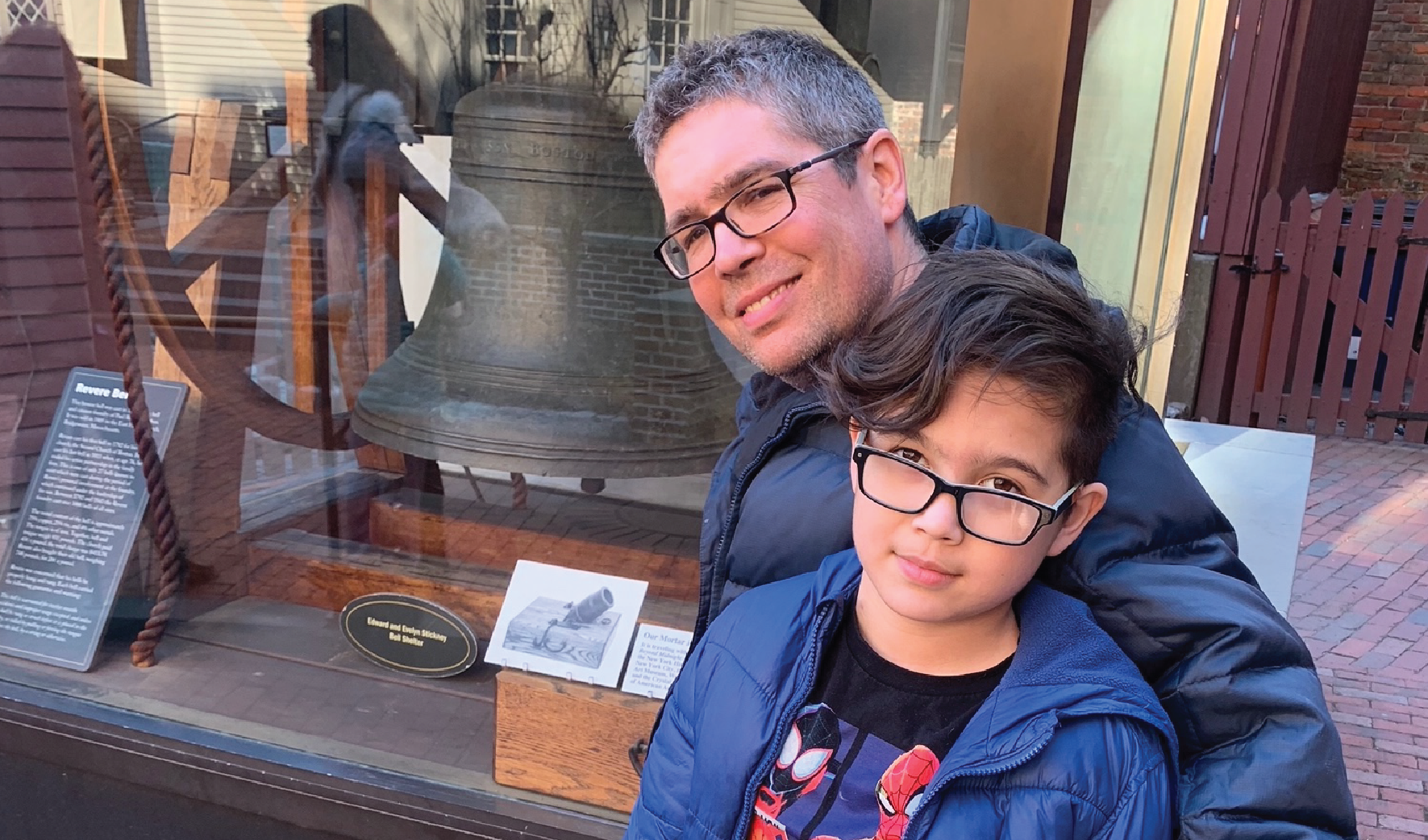 It’s difficult to know where to begin when discussing my son Max’s diagnosis of NF2. I know that it started with a heart-shaped birthmark smackdab in the center of his forehead. Light pink against his soft skin. His mother and I took it for a blessing, but his pediatrician frowned and told us to keep an eye on it.
We got the official diagnosis of NF2 in the autumn of 2018 when Max was 8 years old, in between little league seasons. I know the minute the rain started: a game of catch on the sidewalk, and he was slinging the ball in there. My little southpaw was starting to throw hard (really hard) strike after strike, but when I would toss the ball back to him, easy tosses he’d have caught the summer before, his glove would fall off. Come on Max, put your hand out like a stop sign. He couldn’t do it. I said, “come on, kid, straighten out those fingers.” He said, “I can’t. I really can’t,” he said urgently, a panicked look in his eyes. I crouched down and held his hand in mine. Is this new? The middle and ring finger refused to move.
That’s how NF2 works. It’s slow at times, patient, attacking the body from the inside out, until one day it shows up on the surface. Winter now, and he had no control of those fingers at all. In Spring, the entire hand seemed to wilt. Medicine can also be slow – we saw many doctors but got no clear answers. We finally found out that Max had a large tumor in his brachial plexus that was sapping all nerve function to his right arm. At the same time, the telltale sign of NF2 reared its head on the MRI: vestibular schwannomas on both audial canals. Genetic testing confirmed it.
Neurofibromatosis Type 2 (NF2) is one of 3 types of NF. Neurofibromatosis is a rare genetic disorder that causes tumor growth on nerve-endings in the body that occur in anyone at any time. Affecting more than 130,000 Americans and 1 in every 2,500 births, it is the most common disorder you’ve never heard of. While research continues to advance, there is currently no cure for neurofibromatosis.
I called the NF Network – I want to say on a whim, but whim isn’t exactly the right word – it showed up on my browser at the exact moment it needed to. I called to see if they could help me with insurance problems and was connected with Deb. Deb must have been overwhelmed with my story – where to begin? She put me in contact with John Manth, Kim Bischoff, and others in the network.
The late great Fred Rogers famously said, “Look for the helpers.” I found them at the NF Network. I learned more about NF2 in an hour-long conversation with John than I had in the last year, but perhaps more importantly, I learned that there are wonderful people out there who will help you carry the water when it’s too heavy, and that you can’t care for something as complex and precious as a child with NF2 without support.
They say it takes a village to raise a child, and I didn’t know where the village was until I connected with the NF Network.
The NF Network’s goal is to eradicate the health issues, pain, isolation, and uncertainty that the diagnosis of NF inflicts. You can visit our website to see why we do what we do. https://www.nfnetwork.org

Amidst the challenges the NF community continually faces, the NF Network’s goal remains the same – to be ready to serve the 1,600 new families that will receive their diagnosis of NF every year. If you have the means, we hope you will consider making a donation to the NF Network through the CFC - large or small - so we can continue helping hundreds of newly diagnosed NF families and individuals by providing them educational materials, referrals to NF clinics and specialists, and connecting them with other local support. Without your kindness and generosity, we couldn’t possibly continue our mission to find better treatments and a cure to end neurofibromatosis.

From the bottom of our hearts and on behalf of the thousands of individuals affected by neurofibromatosis, we thank you for supporting the NF Network!

Charity Name
Neurofibromatosis (NF) Network
Photo Caption
Max was diagnosed with NF2 at the age of 8. Seeking answers for this new disorder he had never heard of, Max’s dad Adam found the NF Network exactly when he needed to. By connecting with the NF Network, Adam found essential resources and a community to su
Photo Credit
Max's Family
CFC Number
10227