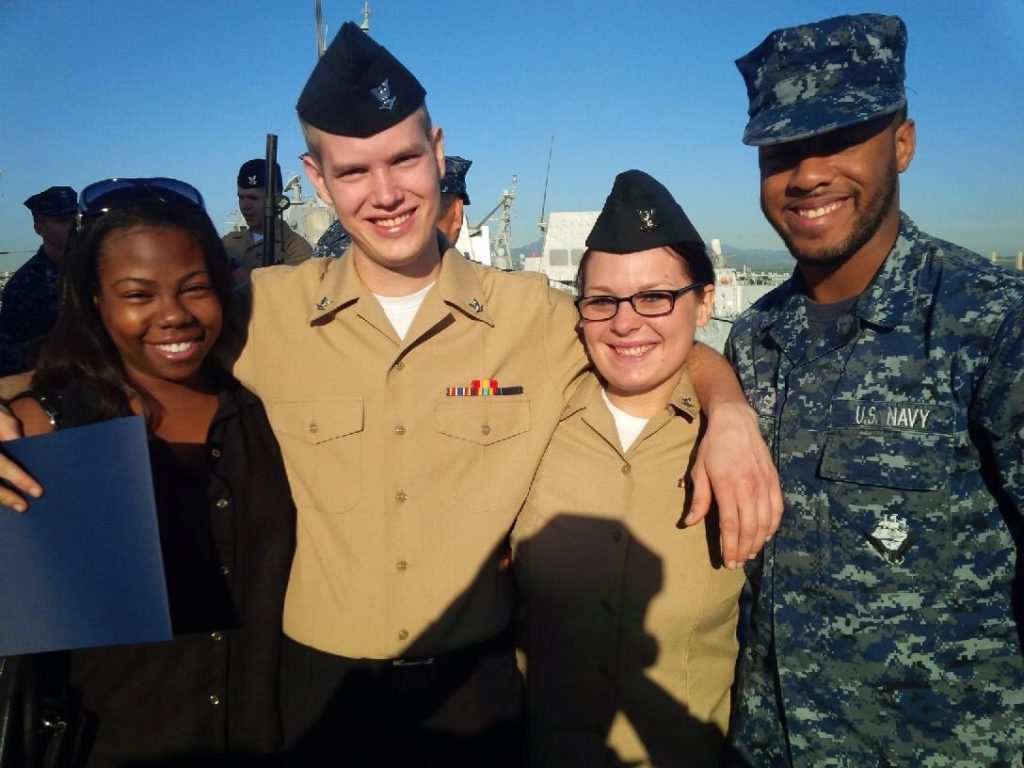 In 2011, at just 22 years old, Oklahoma native Sasha Georgiades found herself in Great Lakes, Illinois beginning her journey to becoming a U.S. Sailor. During her time on active duty, Sasha was stationed in Pearl Harbor, Hawaii with DDG 122 on the USS Michael Murphy. In service, she obtained the title of Enlisted Surface Warfare Specialist, was awarded a Letter of Accommodation, was on crew for the maiden voyage of her ship and the list goes on.

After four years of adventure, Sasha transitioned out of the military and began her education journey at Hawaii Pacific University. In 2018 she graduated with a double Bachelor’s in Psychology and Criminal Justice and most recently in Spring 2020 with her Master of Social Work with a Veteran Concentration. During her time at HPU Sasha was heavily involved with her school’s SVA chapter so we caught up with her to see how serving as a chapter leader helped prepare her for life outside of school.

What is one thing or tip the military taught you that helped you adapt to your higher education environment?

The military taught me to be adaptive. Life will always throw curve balls at us, and how we respond is key. It taught me that I can always find a way, and that sometimes it just requires me to take a different path than I initially expected.

What are some of your favorite accomplishments from your time at HPU?

While at HPU I was featured in the school newsletter for my achievements as a student veteran including my time a part of multiple cohorts including the SVA Leadership Institute in 2018, The Washington Center Veteran Trajectory in 2019, and the VFW-SVA Legislative Fellowship in 2020. I was also nominated in 2019 to attend “Light Up the Night”, a student leader and organization reception. I proudly presented on military sexual trauma at the Institute on Violence Abuse and Trauma (IVAT) in 2020, was a part of the Social Work Honor Society Phi Alpha Theta Omicron and delivered multiple #MeToo monologue performances.

Why did you choose to get involved with the SVA chapter at HPU? Did you serve any leadership positions within your chapter?

I actually got involved because I became best friends with the previous President. She really encouraged me to get involved with the veteran community at the school and I enjoyed what I was shown. I wanted to continue to provide help to veterans and give them the same opportunities I was presented with during my time at Hawaii Pacific University. I served as the Vice President in Undergrad and the President during Grad school.

What events or efforts were crucial in your chapter’s path to impact and success?

Definitely SVA’s National Conference (NatCon). With us being from such a small place it can be hard to get chapters up and going. It was a tool that allowed me and others to look beyond what was in front of us. It presented the chapter with so many different growth prospects off island, most we would have never known about without the SVA networking opportunities provided while there. NatCon allowed our chapter to return to that small island and let other veterans know what opportunities are out there and how making use of them can impact not only them as individuals but also how we as a collective can help veterans and active duty members at a larger level.

What is one thing you learned from your time in SVA that helped you transition into the professional workforce?

The power of networking. My engagement with SVA really taught me the power that networking can have when pursuing professional avenues, especially ones you may have never thought of before.

What career path are you on/what do you do now after graduation and where are you located?

I’m currently focusing on helping veteran and active duty issues by assisting with advocacy efforts. I was offered the position to be a Wounded Warrior Fellow with the District Office of Congresswoman Porter in California. My career path has also been focused on Military Sexual Trauma Research and pushing forward with legislative change to extend the amount of time sex assault/harassment training is given in the military.