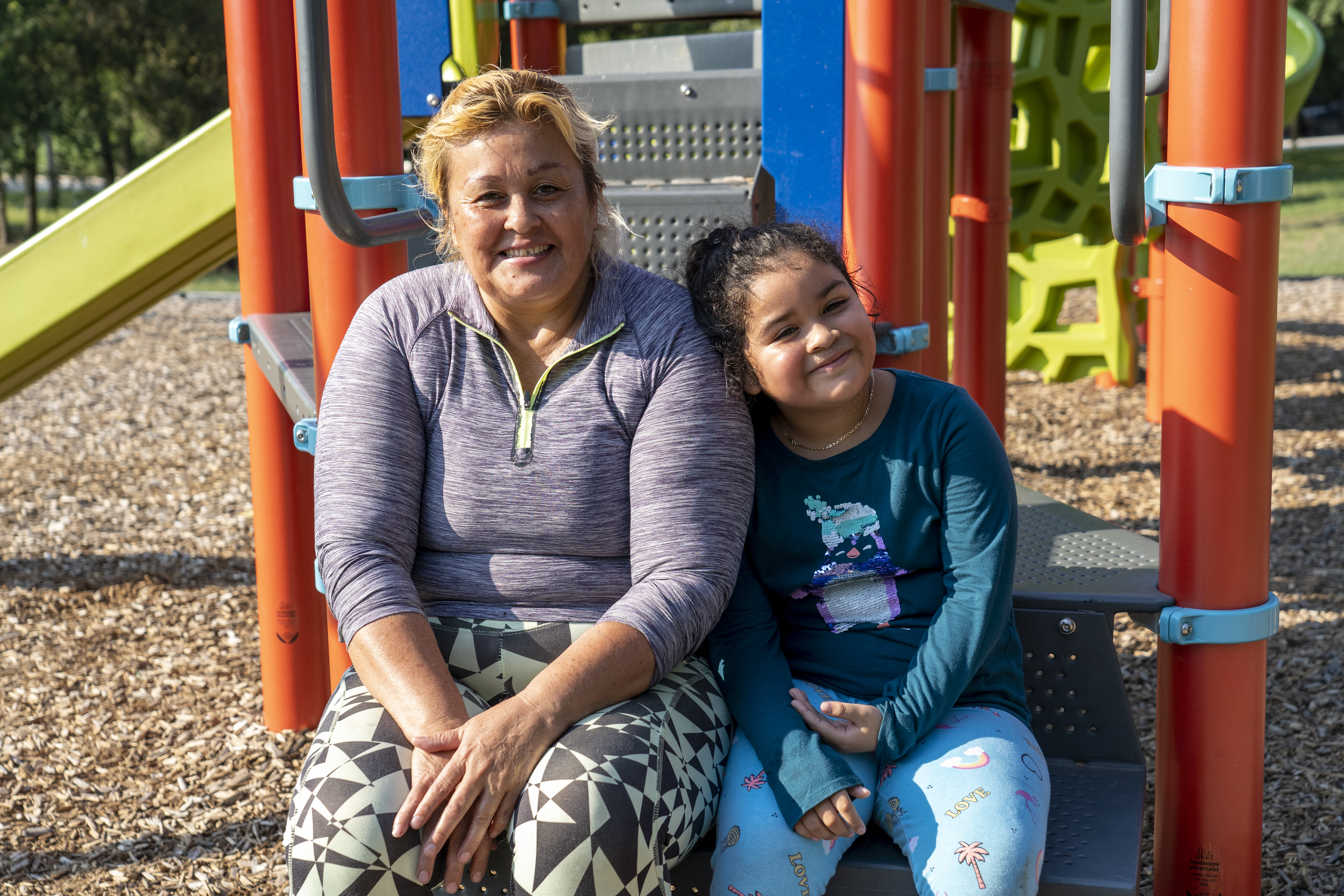 After Setbacks, Food Bank Helps Family Get Ready for Back to School
This summer, Ana has been taking her seven-year-old granddaughter, Daniela, to the park every day. She has an old vehicle, but it doesn’t start every single time. When it doesn’t start, she walks to the park instead. One day on one of her walks, she saw a line of cars and learned about the Food Bank’s summer kids’ meals distributions. It was exactly what she needed for her granddaughter.
Daniela is excited for school. She’s ready to learn and to play tag with her friends, she said. While Daniela thinks about starting second grade, her grandma, Ana, worries about providing for her, especially after the rough past year the family has had.
Daniela was separated from her mom when her mom was deported. Ana has since been raising her granddaughter with the support from her boyfriend who provides for the family. When the pandemic began, Ana’s boyfriend lost his sight to cataracts. With the responsibility of looking after her granddaughter and taking care of her boyfriend who went blind, Ana couldn’t work.
“During the pandemic, my man was going blind. It was so sad. I wasn’t working and he wasn’t working. For us, it was very sad, because my man was losing his sight. In fact, he lost it. He was blind for a year and well, for me it was very sad. We were behind on rent, but God never leaves us,” Ana said.
Without any income, the family began struggling to put a roof over their heads and put food on the table. They fell deeper in debt and were no longer able to pay rent. They had to move out of their home and find a cheaper place to live. Their generous neighbors and friends helped provide the family meals to eat.
“A lady would give us free meals. That’s how we got by. Not everyone helps you…I’m grateful to God for the people who helped us,” Ana said.
After trying to find assistance with the surgery, Ana’s boyfriend was finally approved for the Medical Access Program (MAP). With help from the program, he was able to get the surgery he needed to recover part of his sight.
While the surgery was a success and the worst is over for the family, they now face medical debt and ongoing expenses for monthly eye treatments. Even though Ana’s boyfriend is working, the part time job he has isn’t enough to cover everything.
“That surgery stuff isn’t easy, it’s a lot of money, but they did help him and he still owes. I’m going to be sincere, we still owe with the MAP. At least they’re still helping him, because they’re still injecting his eyes. They inject his eyes every month. And like I said, it was very sad for us, but God never leaves us,” Ana said.
As the family very slowly gets back on their feet, Ana has something else she’s concerned about. In just a few weeks, her granddaughter will start school again. Ana has been able to get a free backpack and school supplies from the school. With support from the Food Bank, Ana can ensure her granddaughter has food on the table to thrive this school year.