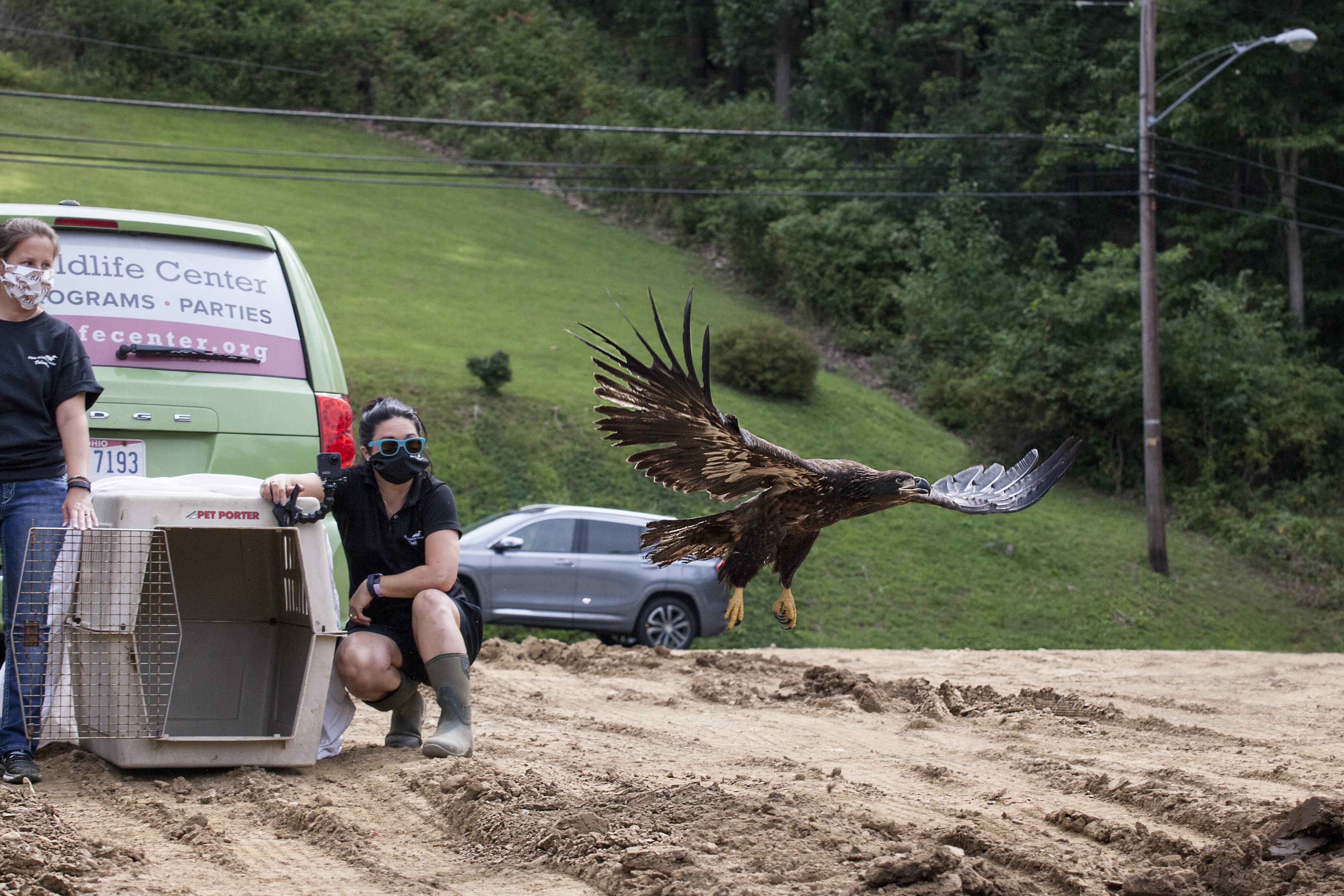 After three months of care and rehabilitation at Ohio Wildlife Center, a juvenile Bald Eagle that was rescued in Licking County was released back to the wild in August near its nesting site in Newark, Ohio.

The eagle was assessed at the Center’s Wildlife Hospital in Columbus and diagnosed with a broken wing, possibly caused by a collision with a car. Follow-up care provided included pain management, wing wrapping to stabilize the fracture, nutritional support, and hydration.

After hospital treatment, the eagle was transferred to the Ohio Bird Sanctuary in Mansfield to continue physical therapy for further flight recovery and muscle strengthening in its final phase of rehabilitation.

Robin Guinsler, the Newark resident who found the eagle in her yard, kept a watchful eye on the bird until it could be transported to the Wildlife Hospital. Guinsler noted in the Newark Advocate newspaper that “I love birds and I was so excited to see him get rescued. It feels good to be a part of it, to have saved the eagle.”

Ohio Wildlife Center’s Wildlife Hospital has treated two Bald Eagles in 2020, three in 2019, and five Bald Eagles in 2018. Bald Eagles in Ohio have increased from a low of four nesting pairs in 1979 to 707 confirmed eagle nests in the state, according to the Ohio Division of Wildlife. Bald Eagles were removed from the federal threatened and endangered species list in 2007, and from Ohio’s list in 2012, a result of conservation efforts throughout the United States to bring the species back from near extinction.

“The community can count on our Wildlife Hospital to be there for wildlife in distress,” Gibson noted. “As an essential service, our donation-supported nonprofit hospital has continuously operated during all phases of the global COVID pandemic,” she said. “Our goal is always to return animals to their natural habitats, as we are the only organization in Central Ohio that has the capacity to treat large numbers of ill and injured native Ohio Wildlife.”

“As our national symbol, eagles are important species to save and sustain in their natural habitats,” she added.

In 2020, the Wildlife Hospital treated 8,105 animal patients, including 190 birds of prey and raptors, 4,860 mammals, and 672 shorebirds, ducks and geese. As an essential service, Ohio Wildlife Center kept its hospital doors open 7-days a week during the global pandemic to care for wildlife in distress from injuries or illness. Many of the animals have injuries caused by car strikes, building and window collisions, lawnmowers and domestic animal attacks.

The Center, which operates the state’s largest wildlife hospital, is funded primarily through donations and receives no federal, state or county tax funds to operate. For 37 years, the Center has provided a range of wildlife protection activities with the goal to return recovered wildlife back to their natural habitats.