LIFE AFTER PTSD: HOW ONE VETERAN GOT BACK ON HIS FEET 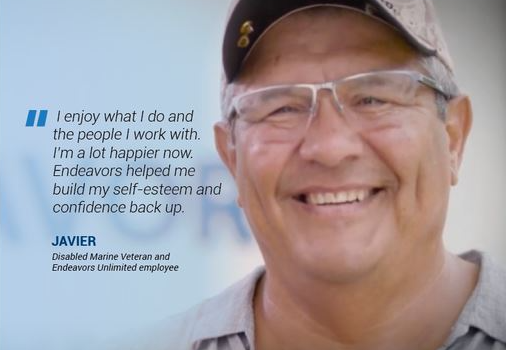 For Javier Sandoval's entire adult life, he knew himself as a man of duty, patriotism, and service.

“I joined the marine corps in 1984,” said Javier. After being stationed at Camp Pendleton for a long time, he was deployed to Somalia, where he was a Marine Corps gunner and served in convoy operations.

What Javier saw overseas would change his life forever.

“We got ambushed probably three times,” says Javier. “[The enemy] used children to do their fighting,” he said. “That took a toll on me.”

When he decided to get out of the service, Javier moved back to Texas and began serving as a police officer for a school district, working specifically to help stop gang violence. On the outside, he looked like a successful, patriotic serviceman. On the inside, however, he was haunted by memories of war.

“I was diagnosed with severe PTSD and severe anxiety,” said Javier. “As I progressed in the police department, I started having nightmares and couldn’t sleep.”

Many Veterans try to cope with mental illness by numbing the pain and memories. “I tried to self-medicate with alcohol…and that just got out of hand. I was killing myself, really.”

However, this coping technique only left him hurting more— unable to keep a job.

“I went from a proud officer in the marine corps to a proud police officer to living in my van. I was homeless.”

The turning point? Javier’s brother referred him to Endeavors. Here, Javier connected with Veteran Supportive Services and was able to get back into housing. His case managers realized he was needed mental health care and referred him to the Steven A. Cohen Military Family Clinic at Endeavors.

Through these programs, Javier was given a new start.

Eventually, Javier also found employment in custodial services, warehouse, and landscaping through Endeavors Unlimited, a division of Endeavors that employs individuals with disabilities. He also reconnected with his family, who he had lost contact with due to alcoholism.

“I enjoy what I do and I enjoy the people I work with. It keeps me busy and active. I might not make $75,000 a year anymore, but I’m a lot happier because I have my family and my work. Endeavors helped me build my self-esteem and my confidence back up. It’s all coming back; it’s total night and day. And now I see the sun, every day.”

Charity Name
Family Endeavors, Inc. dba Endeavors
Photo Caption
When Javier’s brother referred him to Endeavors he was connected with multiple programs, allowing him to get back on his feet.
Photo Credit
Endeavors
CFC Number
29611