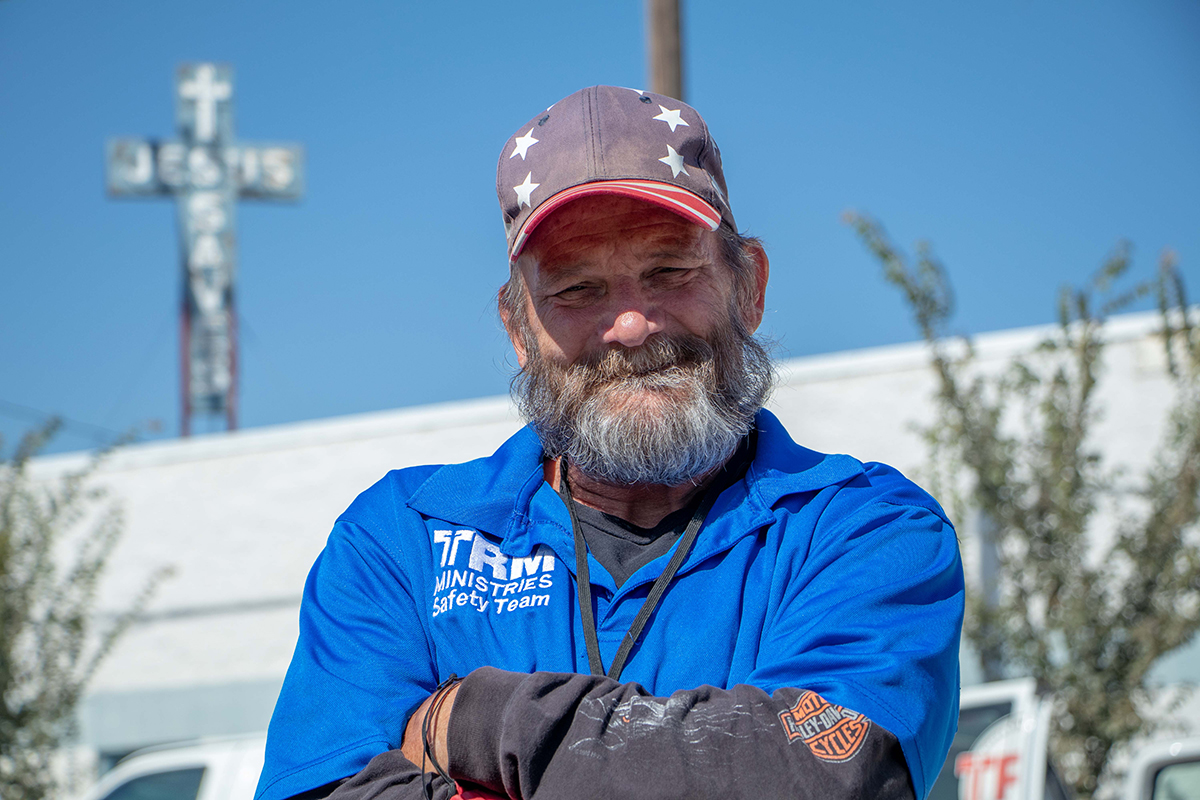 The battle of addiction has raged around us for millennia, its survivors often fighting for their lives alone and behind closed doors. This month we connected with one of those survivors, a TRM employee and former guest named Kenny, who fought a 43-year-long battle with meth and heroin and shared his story with us.

Kenny first came to TRM in 2012, knee deep in addiction and homelessness, when the friend he was staying with asked him to leave and brought him to TRM. Never having been able to get clean and sober for longer than three months, he stayed a short time before the addictions he fought overtook him again. In his 50’s and down to a frighteningly low weight, his health spiraled downward and his life was slipping away.
He came back to TRM two years ago to try again. In his words, “I felt horrible. But I knew I needed to do something different or I wasn’t going to be living much longer. That’s how bad it was for me. A short way to put it: all I was doing was living to do drugs and doing drugs to live. It was a sad way to exist, and I just didn’t know a way out. I didn’t know a way out. The people at TRM began to show me a way out.”
He goes on to say, “There were avenues I had to take - like I had to go to Valeo. I relapsed and had to go back to Valeo. But God and TRM never turned me away. I’m a miracle! There were corrections, I had to do things to get myself better, and there were consequences when I messed up, but they never turned me away. They were always helping me.”

Through the efforts of TRM and community resources, and much prayer and determination on his part, on January 21st Kenny will celebrate two years being clean and sober for the first time in his life. When asked what made this time different he says: “I have way too much going on in my life now - way too many good things to blow it. It’s one of the major differences for me.”

Kenny says there were people in his life who didn’t think he would even make it to 40, and this year he turned 60 and is the healthiest he’s ever been. He has gained a healthy weight and rides 200 miles a month on his bike, riding on roads and bike trails around Topeka whenever he has free time. While doctors have told him he has damage from years of addiction, enough of him is bouncing back that he’s going to be alright.
Kenny is now employed by TRM, working the men’s side front desk and reaching out and helping people fighting the same battles he fought for decades. He gets to make a difference every day in the lives of those who struggle with addiction, trauma and loss of hope. He gets to show people that there is a way out, no matter how many battles they have fought and how little strength they have left.
He describes the highlights of his time at TRM as the people he works with and the small groups that meet three times a week to offer support and keep each other on the right track. Five years from now, Kenny’s greatest hope is to have his own home and his own car. And, God willing, his own significant other, but he says he’ll let God worry about those things in his timing.

In this season of Thanksgiving, Kenny and all of us at TRM are reminded of how abundantly grateful we are for people like you who support our services to those struggling with homelessness and addiction in our community. Kenny’s 43 years of addiction were no match for the unfailing love of God along with the love, support, and prayers from all those who come alongside us as we work together to help people break the chains of addiction. Together with God’s love and yours, miracles are happening in the lives of thousands like Kenny! We pray you and your loved ones experience the miracles you are seeking also!